Sometime last fall, a thunderstorm knocked over a massive old tulip tree and washed it into Wissahickon Creek almost whole. It traveled down the swollen river until it reached the waterfall where the river runs under Ridge Avenue. It got stuck on the lip of the waterfall for months, and transferees at the bus stop right next to it could watch as it slowly died.

Its weight and roots holding it precariously in place, the tree remained at the lip of the waterfall for most of the fall, winter, and into the spring. Torn from the ground and balanced in the center of a plunging river, this tree maintained the same timetable as its brothers on the bank as the seasons cycled: its leaves turned from green to orange to brown and then fell off at the exactly the same time. It can take years for a tree to die. Most of the time you don’t know it’s happening. Sometimes you do.

I decided to finally read The Limits to Growth after the election, after hearing too many references to it from my fiance and live-in apocalypst Mathew J. Davis.

Limits to Growth is an economics book with a premise I knew about but had chosen to not to read, thinking it too preposterous to be correct…or rather, its assumptions too cynical for the karmic crowdsourced Alinskyite mythology that keeps me going.

Limits to Growth is a 400-page piece of realllly bad news that spells out why all those dystopias you see in movies are a sure bet. The book documents the working out of the worst math problem of all time: determining how much longer our species has before we use up the resources required to continue on in industrial fashion: heavy metals, water, the components of concrete, precious metals like platinum. America’s fertile topsoil (now known as the bottom of the Gulf of Mexico).

The main considerations in the model include:

…at a global scale.

This is such a colossal modeling project, involving demographics, materials science, and thousands of feedback loops. I’ll spare you the details. It was thorough, and convincing, and was written in a detached tone that made you wonder what kind of sedatives the authors had to be taking.

The bad news is this: social change and technology can alter the length of time we have left, but they are merely delaying an inevitable population crash. Believing that either of these forces will be salvation defines our American foolhardiness. Even in the best case scenarios – if human beings evolve spiritually with record-breaking speed and develop miraculous levels of cooperation, enlightened decisionmaking, and self-sacrifice, the graphs mostly look like this: 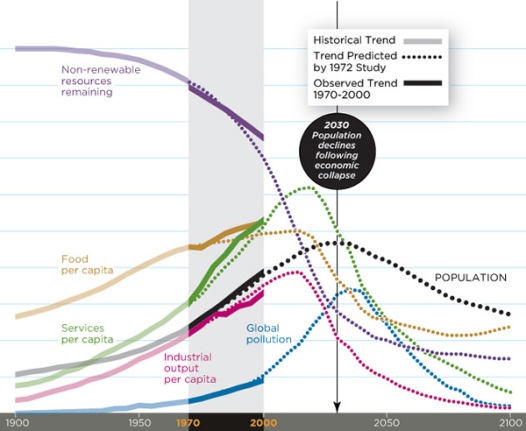 You can read about how well their predictions, originally made in 1971, are holding up here.

The election in November made me many different types of angry, but the grittiest of those types of anger was the “what have you done?” variety.

In most movies ever set on a spaceship, there is usually a scene of two fools fighting each other with projectile weapons who nearly get everyone on board killed. Gone are the days when Americans can blame the people in power for screwing over our country. Americans elected this douchebag themselves. By direct vote.

They were the people who look at a panel of lights they don’t understand and, because they are mad that their 4,000-square-foot home and two SUVs have gotten them into debt, say “I DON’T KNOW WHAT THIS BUTTON DOES BUT I’M GONNA MAKE THOSE MEXICANS PAY!” and slap them all haphazardly.

My post-election anger and depression lingered around all winter, and I mostly just read books, collected a paycheck, looked at rowhomes, and begged Mat to stop telling me the news. On the spring time side of the year now, I can remember that human nature is not as callow as it seemed in January – all nations considered – and that it is our American culture that is sick. Culture can change almost instantly.

I emerged because spring showed and dragged me out of the door. I also work for an 85-year-old who is more productive than I am, whose fierce and relentless commitment to her own life and story shames me. If I were very old I would take comfort in knowing that I won’t be around to see how human beings respond to climate disruption. But I am 41 and wondering: what could Philadelphia teach the rest of America about survival, and even joy?

Who knows what this mood even means? I’ve never seen so many prepper Facebook posts in my life – but is that just a sign of the fact my cohort of friends have hit midlife? I remember reading Jane Jacobs’ brilliant last book when it came out – Dark Age Ahead, about the decay and collapse of our country’s cultural and civic pillars. It rang true, but I wondered how social science can be affected by the shadow thrown across our minds by our own mortality.  It is impossible now to separate the feeling of the Earth dying from the cellular processes inside of us. Children hardly know what to do now – they explode with rage or lapse back into any form of narcosis to which they have access.

I don’t have any answers. But I am going to go find some.

One thought on “The Winter of Worst-Case Scenarios”