In January 2016, while working in sales for SolarCity, I started a new group in Philadelphia to promote renewable and clean energy based on a very successful organization I had seen in Colorado, called CRES.

The Colorado Renewable Energy Society is a statewide, volunteer-run catchall organization with the broad-brush mission of promoting clean power. I volunteered with them in 2015, and was inspired. Large enough to have multiple chapters with well-attended meetings, CRES is a collection of tinkerers and DIYers, clean energy technical, sales, and entrepreneur types, political advocates and government officials, quietly radical utility employees, videographers, writers…It was a curious, fertile, and energetic mix. Jargon-heavy conversations were balanced with the notes of visionaries, and the personality types bounced off each other well.

CRES had been around for a long time, and had been one of the primary drivers behind the passage of Colorado’s Renewable Energy Portfolio Standard of 30 percent, the then-highest in the nation and one of the greatest impetuses to clean power development in Colorado. Like Pennsylvania, Colorado is one of the most heavily loaded fossil-fuel “energy states” in the country, but unlike Pennsylvania, it has taken advantage of its renewable resources as well, and has developed a thriving clean energy economy.

It was a real-life example of what I’d read in Richard Lester and David Hart’s very good book, Unlocking Energy Innovation: How America Can Build a Low-Cost, Low-Carbon Energy System. Written in 2012, it spelled out the social conditions for development of an “innovation system” in clean energy, similar to the systems that American policy and industry historically colluded to promote information technology, oil and gas, nuclear power, or healthcare technology.

According to Lester and Hart, a clean energy innovation system does not arise spontaneously from consumer will or popular interest – it is fostered through institutional arrangements that make it possible, each taking a role in an extended period of time diagrammed into four stages of energy innovation:

They identified a number of these institutions and social arrangements (some you already know, like government research funding, and some that are “under discussion”, like utility regulations) that made this possible, but also some of the current obstacles to advancement at each stage of the process: 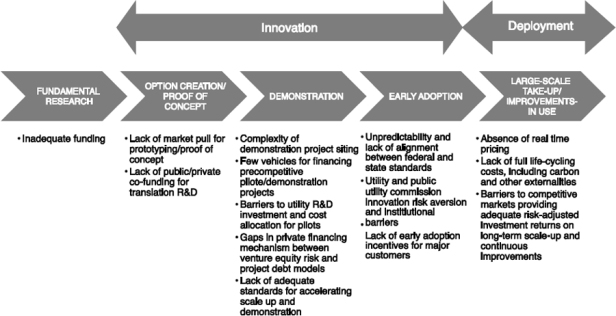 Developing the innovation ecosystem in Philadelphia and the region – seeing which obstacles we could address – is why I started the Greater Philadelphia Renewable Energy Society. Working for a solar company at the time that was only allowed to interconnect with the electric company in the suburbs, I knew that regionalism was needed for this to cohere (hence the “greater.”) I also knew that there were solo clean energy fans floating around out there like spare electrons. I was hoping GRPES would be a nucleus for them.

Philadelphia has very different resources than centers of energy innovation in the country. Our social resources are different, our economic resources are different, our history and knowledge are different. We don’t have Massachusetts’ liberal state government, or the earnest billionaires of Silicon Valley. To develop our regional clean energy economy, it is important for us to determine what those resources are, and build a popular movement to support them. Clean energy innovation is a vast field, with needs as diverse as its potential. Our fossil-fuel twin, Texas, is the nation’s largest oil and gas producer, and a place one would expect to be hostile to renewables – but it’s also our nation’s largest producer of wind energy*.

Mapping the statewide resources of Pennsylvania onto an innovation schema is beyond the scope of this post, but GPRES is continuing to develop this community under the leadership of Mark King and Leslie Craigmyle with new meetups promoting Solarize Philadelphia and National Drive Electric Week. If you are in the Philadelphia region, join them here. Or just read our posts on our Facebook group. So far, the group has turned out to precisely what I had hoped: engineers, financial analysts, sustainability professionals from related fields like college-campus sustainability. With organizing help from Robin Xu and Thomas Flaherty, we’ve already hosted meetups on:

..And there is so much more to talk about!

*The Texas Renewable Portfolio Standard was originally created by Senate Bill 7 and signed by Governor Bush in 1999, which helped Texas eventually become the leading producer of wind powered electricity in the U.S. The RPS was part of new laws that restructured the electricity industry. The Texas RPS mandated that utility companies jointly create 2000 new MWs of renewable energy by 2009 based on their market share. In 2005, Senate Bill 20, increased the state’s RPS requirement to 5,880 MW by 2015, of which, 500 MW must come from non-wind resources. The bill set a goal of 10,000 MW of renewable energy capacity for 2025, which was achieved 15 years early, in 2010.